Site of a Dangerous Leap 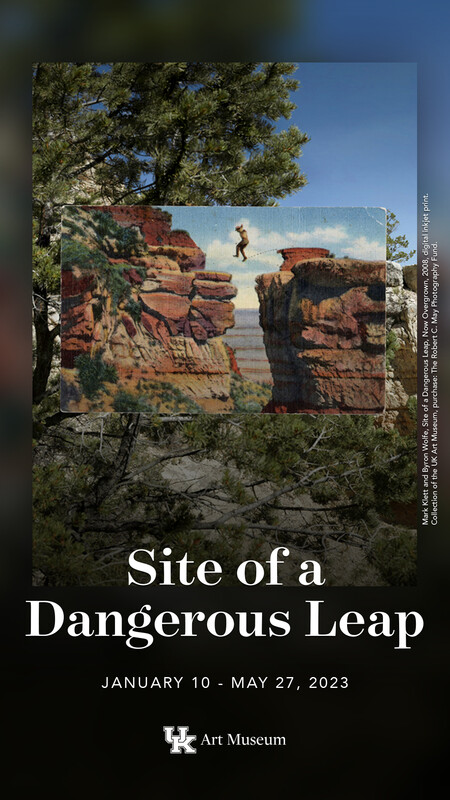 The title and spirit of this exhibition was inspired in many ways by a photograph made by Mark Klett with Byron Wolfe. An intrepid climber bounds from one rocky outcrop to another; caught in mid-air, his landing is uncertain. Klett started out as a straight photographer, but began marrying historic and contemporary imagery, occasionally with tongue in cheek. He has deftly inserted a vintage postcard of the daredevil jumper into his own twenty-first century photograph of the same vista, now partly obscured by pine trees. Klett’s work considers iconic landscapes and the continuum of history, but also looks to the future. The tiny figure leaping across the craggy chasm is an optimist: anticipating a safe landing, but also enjoying the frisson of fear and jolt of adrenaline that accompanies such an undertaking.

This exhibition is an idiosyncratic jump into the Museum’s permanent collection, highlighting its breadth and tasting its wonder. In twenty years, I have come to love it and am still frequently (and happily) surprised by it. Site of a Dangerous Leap features a wide variety of prints, drawings, photographs, and sculptures that transcend centuries and cultures but are linked by visual tropes, an expression in the eyes, or geometries subtle or obvious. It includes a delicate mid-twentieth-century abstraction by the German artist Julius Bissier who was inspired by ancient Chinese brush painting. Moroccan-born artist Lalla Essaydi grew up in a culture that forbade women from writing sacred texts, so she covered a modern-day odalisque in Arabic script bearing a feminist message. British illustrator Agnes Miller Parker created a tiny, perfect gem—a wood engraving of a fox. It has never been shown at the Museum before.

To return to the photograph Site of a Dangerous Leap, Now Overgrown, Klett has performed a bit of classic misdirection, encouraging us to focus on the airborne man. Almost unseen among the pine and shadow are a pair of hands clutching a branch. A prosaic explanation is an assistant clearing the view, but it might be read as a parable concerning the fear of going out on a limb, and the consequences of hanging on.