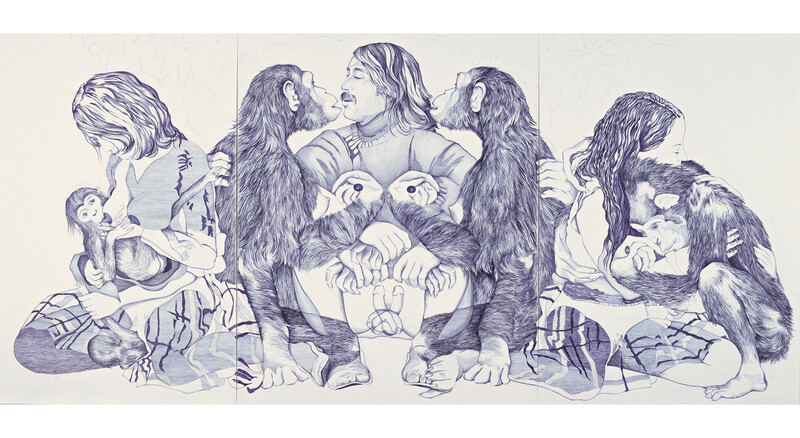 Marlene McCarty is known for her drawings that examine aspects of sexuality, articulation of power, and social formation. Using graphite, ballpoint pen, and occasionally watercolor, she has made composite portraits of teenage female murderers, as well as humans interacting with other primates. Informed by research, media images, and historical data, her works are often unsettling and explicit, deriving their power from the combination of provocative content, monumental scale, delicacy of line, and subtle shading.

McCarty grew up in Lexington and her family has resided in Kentucky for over two centuries. She recently donated large portraits of her parents—Phyllis Lee James McCarty and William Kenneth McCarty—seen with their grandchildren. Both drawings play with time, mixing and inverting the actual ages of the subjects and using details of clothing and hairstyle to further complicate the personal narrative.

This exhibition pairs these two works with a large triptych GROUP 2, 2007, an almost symmetrical drawing that shows male and female caregivers who nurse, comfort, and communicate with several chimpanzees. The humans are partially nude, reducing the differences between themselves and the chimps, and suggesting a clear lineage and inter-species intimacy. The rendering of their bodies and expressions recall the illustrations in the 1972 sex manual The Joy of Sex, with its assortment of positions and practices as demonstrated by loving partners.

Thicker than Water raises questions about memory, legacy, and the complex space that exists between nature and nurture. This exhibition is the first time the artist is exhibiting in her hometown.

McCarty was a member of the AIDS activist collective Gran Fury and was the co-founder of the trans-disciplinary design studio Bureau, along with Donald Moffett. Her work is in the collection of institutions including the Brooklyn Museum; the Museum of Modern Art, New York; and the Museum of Contemporary Art, Los Angeles, among others.