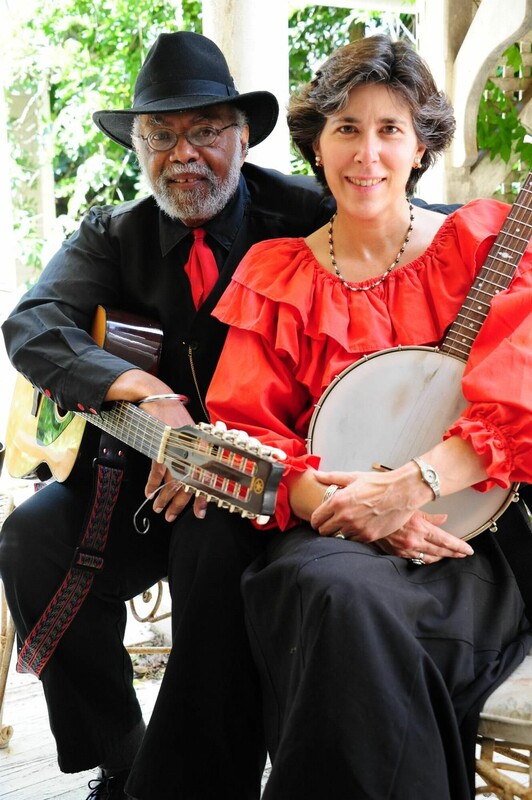 Sparky and Rhonda Rucker perform throughout the U.S. as well as overseas, singing songs and telling stories from the American folk tradition. Sparky Rucker has been performing over forty years and is internationally recognized as a leading folklorist, musician, historian, storyteller, and author. He accompanies himself with fingerstyle picking and bottleneck blues guitar, banjo, and spoons. Rhonda Rucker is a musician, children's author, storyteller, and songwriter. Her blues-style harmonica, piano, old-time banjo, and bones add musical versatility to their performances.

Sparky and Rhonda are sure to deliver an uplifting presentation of toe-tapping music spiced with humor, history, and tall tales. They take their audience on an educational and emotional journey that ranges from poignant stories of slavery and war to an amusing rendition of a Brer Rabbit tale or their witty commentaries on current events. Their music includes a variety of old-time blues, slave songs, Appalachian music, spirituals, ballads, work songs, Civil War music, railroad songs, and a few of their own original compositions.

Over fifty years of performing, Sparky and Rhonda have performed at the Kennedy Center in Washington D.C. and the Smithsonian Folklife Festival as well as NPR's On Point, Prairie Home Companion, Mountain Stage, and Morning Edition. Their recording, Treasures & Tears, was nominated for a W.C. Handy Award, and their music is also included on the Grammy-nominated anthology, Singing Through the Hard Times.

The Ruckers have been featured tellers at the International Storytelling Center and Festival. Sparky is a natural storyteller, having grown up hearing his father, uncles, and other family members endlessly telling tales. Sparky and Rhonda each tell solo stories, but they also tell stories together (in tandem), always adding life and humor to the characters and tricksters in their Brer Rabbit tales, Jack tales, High John the Conqueror stories, preacher tales, and family stories.

Sparky and Rhonda weave their music into captivating stories that the history books don’t always tell, and they share this knowledge in many schools, colleges, and libraries. Their educational programs span over three centuries of African-American history, including slavery, the Underground Railroad, the Civil War, the birth of blues music, and the civil rights movement. Each era is interspersed with stories and popular songs from the time period, celebrating the diversity of the nation's history. They are also available for author visits to schools and libraries.