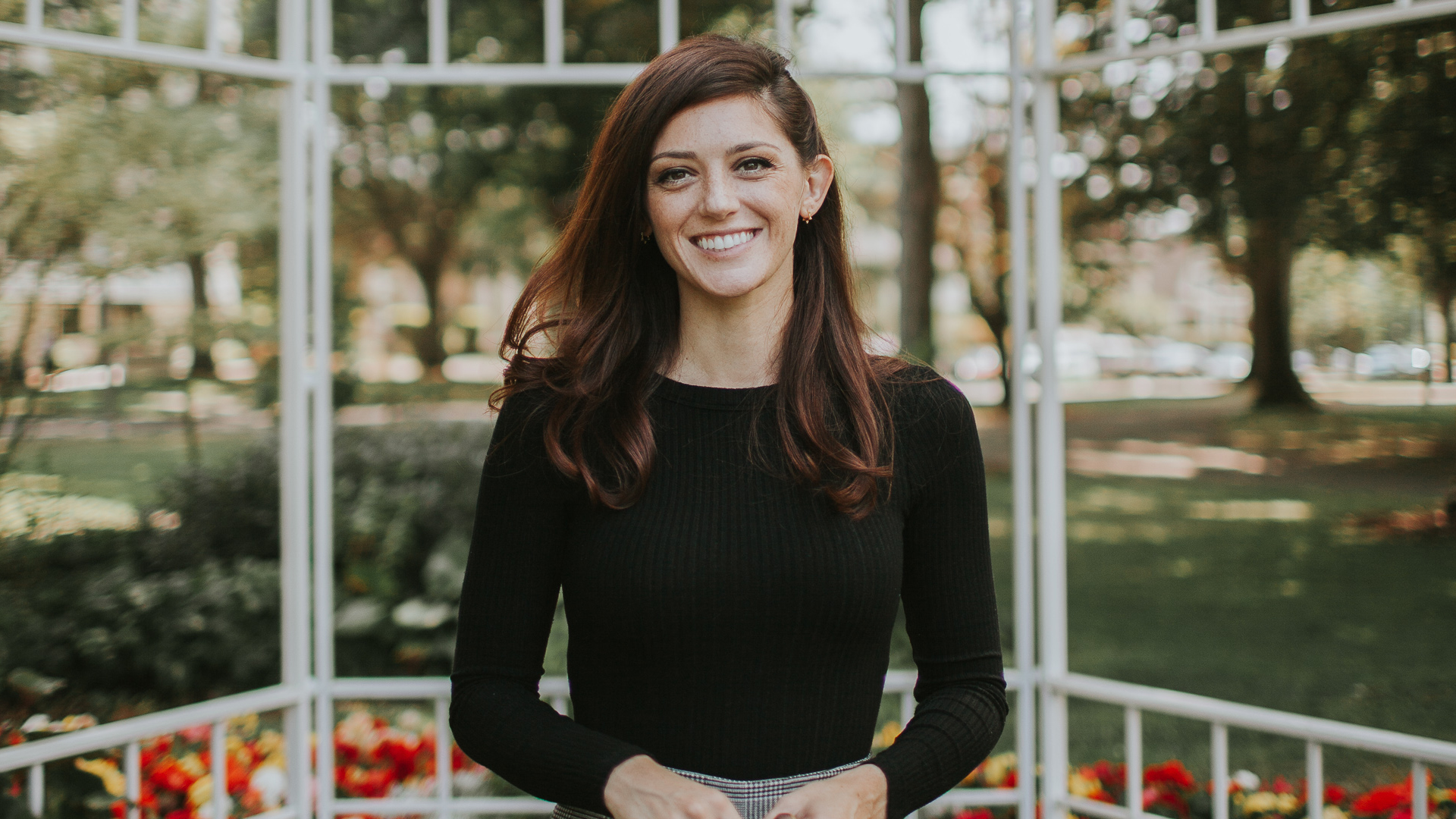 Dr. Kaitlin Bove currently serves as Director of Instrumental Ensembles and Assistant Professor of Music at Pierce College in Puyallup, Washington and is a co-founder of the Girls Who Conduct initiative and founder of And We Were Heard, a non-profit organization dedicated to connecting underrepresented composers with the larger classical music community. In addition, she a member of the National Band Association, College Band Directors National Association, Women Band Director International, and a member of the scholarship committee for Lift Up Our Voices. The College of Fine Arts recently got a chance to catch up with Kaitlin to get a closer look at all of the work she’s been doing.

CFA: Tell us about the two projects you were instrumental in creating - And We Were Heard and Girls Who Conduct.

I founded And We Were Heard in the fall of 2018 while I was still a graduate student at UK along with a few friends across the country in the wind band scene. The idea came to me after I witnessed a heated discussion on social media where two camps were debating whether composer demographics were important when programming concerts. A point was raised that it was difficult to find music by diverse composers and, even when you could, if their music had no reference recording or perusal score, it made it very difficult to select the work.

My thought was: if so many people want to be programming with more composer diversity and can't find the music, why don't we develop a program where we can match composers with ensembles who will record reference audio of their works - and give them valuable feedback during the collaboration process? As of fall 2021, we have 47 recording projects completed (even though most of our history was during the very challenging pandemic era) and have branches working with composers and ensembles in the wind band, orchestral, and choral areas. We plan to launch a chamber ensemble branch later in the season. Our website houses all the recordings (as well as information on the composers and where to purchase the pieces) and we also advertise consortium opportunities by underrepresented composers, databases of programmable works, and a resource list of other DEI initiatives in the classical music world. We will also be launching a podcast where each episode will focus on a piece we've recorded including interviews with the composer and the collaborating ensemble director.

Girls Who Conduct was launched in the summer of 2020 by founder, Chaowen Ting (NanoWorks Opera, Director of Orchestra at Georgia Tech) and I was on the ground floor as a co-founder. Our mission is to provide mentorship, training, fellowship, and opportunities for women and nonbinary conductors across the globe. Our organization is special because we do not just focus on one type of ensemble conducting; but rather, our group of co-founders have backgrounds in orchestra, wind band, choral, and opera conducting. We have also collaborated with conductors from Broadway, film, and military ensembles through our various projects.

Our inaugural event took place in spring 2021 where we worked with 50 young women from the United States, Canada, South America, and Europe in a 6-week virtual workshop (two of which were current UK students: Katie De Witt and Lara Roberts). The participants received instruction and feedback on conducting, information about navigating education and careers in the various conducting theaters, and advice on their resumes and interview/audition skills. The group of mentees were encouraged to stay in touch and continue to fellowship with each other and several of them have become student mentors themselves for our 2022 class of participants.

In June 2021, we hosted an international virtual conference with women conductor guest speakers from around the world sharing their experience and advice to attendees of all ages and genders. For the 2022 season, we have partnered with the Georgia Symphony Orchestra to bring six scholarshipped Girls Who Conduct fellows to Atlanta for three weekends of a conducting workshop/symposium with the musicians and directors of the GSO. We are also developing a curriculum at the middle school/high school level for local women to start leadership and mentorship clubs with girls in their music programs. We will be bringing the virtual workshop back again next spring and I will be heading this project within our organization.

CFA: You earned your DMA from UK in 2019, with your dissertation on Caroline Shaw's work. Can you talk a bit about that process, the inspiration behind it, and how that may inform your work currently?

When looking at completing a doctoral project, I wasn't terribly interested in a large-scale analysis of a large work because I wanted to complete a project that was a bit more tangible and "live". I decided during my first year at UK that I wanted to create a transcription (I had done many up to that point for various ensemble types) of a work that fell under the following rubric: 1.) A piece by a woman composer, 2.) Who was alive and potentially available to collaborate with, and 3.)Who had not yet written for wind band.

I spent a lot of time looking for the piece until I found Caroline Shaw's Partita (I was previously aware of Roomful of Teeth, the performing ensemble, but not this exact piece). Caroline had received the Pulitzer Prize for Music in 2013 for this work, making her the youngest recipient in music and one of less than ten women to ever receive the prize. Transcribing this work would also make it the first arrangement of a Pulitzer Prize work available to wind bands.

The piece is for a vocal octet and the music is primarily wordless where the goal is to build textures and soundscapes outside the traditional expectations of a classically-trained voice. While there are very few sung lyrics, there are iconic moments of spoken word and I wanted to keep those elements - so I expanded the wind ensemble to include eight vocalists who would reproduce all the spoken word lines from the original (as well as play jaw harps in the third movement to mimic throat singing elements). I was immediately excited about the timbral implications of moving the vocal sounds over to the wind band medium as I would have to work carefully to recreate specific moments using a variety of instrumental combinations, tessituras, and extended techniques in my scoring. My process involved listening to the original recording while studying the score and writing down my initial thoughts of instrumental representation for each sound. In about five cases, I struggled to find something that would work, so I polled friends and colleagues to come up with solutions - my friends in Jim Campbell's percussion studio were especially helpful at this time (and I had Professor Campbell on my dissertation committee, so he made himself available to me for advice, as well!).

I completed a draft by January 2019 and did one recorded reading session with the UKWS where I was able to hear what worked and what didn't. I also had a great relationship with the musicians and got them to write in comments and feedback on their parts so I could peruse their reactions when they passed the draft back in. I completed the final draft in February and we had a few rehearsals prior to my lecture recital in March. I'm very grateful to Dr. Cody Birdwell for giving me time with the UKWS to fit in this mid-season half concert between the rest of the performances scheduled that spring. In addition to the Partita, I also programmed Ola Gjeilo's Meridian for wind band and full choir and Percy Grainger's Colonial Song for wind band - but included the original wordless vocal duet in addition to the winds. In this way, I was able to round out my complete recital with all music for winds and voices in some very non-traditional ways.

Throughout the process, composer Caroline Shaw was incredibly supportive and accommodating, granting me two interviews, reviewing my score, watching our world premiere via livestream, and cheering the project on. When it was all completed, we contracted the work to be published as a rental piece available through Murphy Music Press, which was an incredible honor for me.

CFA: Is there a memorable concert, either performing or conducting, that you had while at UK that you'd care to share with us?

From a conducting standpoint, I'd have to say my lecture recital was a huge highlight of my career. In addition to premiering the Partita, it was such an honor to have the University Choristers join the Wind Symphony on Gjeilo's Meridian which opened the finale up from small wind ensemble settings to a full choir wrapping around the audience. The piece has such a cinematic and optimistic progression to it - it's the kind of work where everyone walks away with a little smile and energy in their step and I'm so happy Dr. Birdwell and Professor Wilson gave me the opportunity to work with their ensembles to make it happen. From a performance standpoint, I had the opportunity to play some flute with the UKWS when I wasn't conducting. We performed the Maslanka Symphony No. 4 which is this huge, meditative work and immensely challenging. I recall the ending chord in our last performance being so monumentally full and loud that as Dr. Birdwell cut us off and the audience began to applaud, I couldn't stop myself from laughing with incredulous joy.

CFA: Is there anything you would like to share with a current School of Music student that you feel may be helpful to them on their path forward after graduation?

It's really easy to get caught up in all of our required coursework, studying, practicing, holding down jobs, maintaining a social life, etc. and feel like we've got no time for anything else. I would encourage every student to really sit with their own interests and passions and decide what is most important to them - then lean into those, in addition to fulfilling all of your educational and professional requirements while you're at school. When you see a problem, fix it. If you have an idea, try it out. Ask for help or bring in other people who are excited about the same things as you and do your best to get the SoM and the university involved with your ideas and projects. The worst answer you'll get is a "no" and you can always find other ways to make things work. Education shouldn't just be about fulfilling a contract to get a job - but building enthusiasm, passion, resources, and networks to solve problems and make the world (even if it's just in our little professional field) a better place.

Watch the performance of Dr. Bove's Doctoral Lecture Recital, "Endless Lines," from March 5, 2019, below, featuring the UK Wind Symphony and UK Choristers on the Singletary Concert Hall Stage on the campus of University of Kentucky in Lexington, Kentucky.