As University of Kentucky students hit the Alumni Gym this semester, a new Wildcat mural created by students in the School of Art and Visual Studies will greet and inspire them as they meet those new fitness goals. 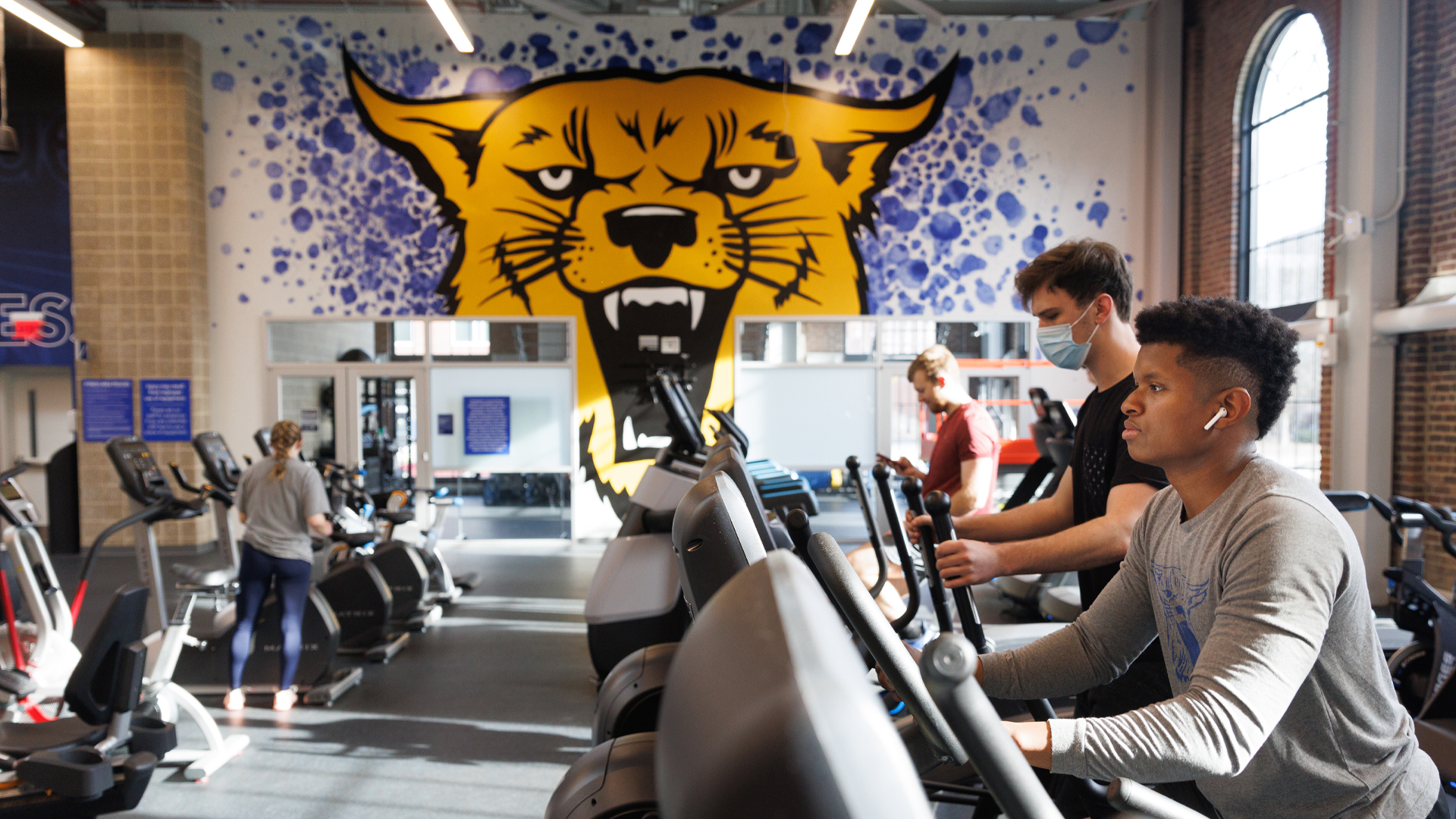 Completed as the Fall 2021 semester came to a close, the mural is the product of Guerrilla Art, Interventions and Social Practice, a special topics art class led by Lee Ann Paynter, a senior lecturer.

As part of the course, 13 students explored the intersection of one's artistic voice and its expression in public space, taking artwork out of the studio and into the public sphere, while considering the role of the artist in the social fabric.

“Creative social practice blurs the distinction between life and art, utilizing various strategies of representation, dialogue and interaction,” Paynter said. “In this investigation into public art and social engagement, students learn the techniques and strategies used in interventional art while developing their own creative ways to engage in the public sphere and make work about current social and cultural issues that are relevant to them.”

As the course title hints, the class is very fluid in nature. Each semester, Paynter tries to do a larger group project where hopefully the entire class can be involved. Last year, the class created the "Imagine Nation" mural on Emmaline Lane near campus, and the year before it installed the "Inside Out Lex" project on the east facing wall of Carson's restaurant on Main Street.

“We have to be ready to act quickly, and to also be flexible.”

Ultimately the opportunity this semester came down to one wall in the renovated Alumni Gym, located in Gatton Student Center, executed by three students from the course.

The class discussion started with the Office for Student Success’ Lance Poston, Ron Lee and Steve Stauffer, who expressed interest in adding a mural in the gym.

“When Alumni Gym opened, we had some graphics in there that were part of the project, but that left us with several blank walls,” said Lee, director of Campus Recreation and Wellness. “We talk about trying to provide experiential education for our students, and I thought this was a great opportunity to enlist our students to come up with something to put on those walls.”

Murals are visually compelling on a very basic level due to the sheer size of the art. Historically, murals are technically some of the earliest forms of art dating back to the cave paintings — it was then, as art is now, an important mode of communication, Paynter explained. Murals represent culture and the society in which they are created, they tell stories about people and dreams, and they serve as beacons of values and as messages of needed change.

As part of the assignment from the Office for Student Success, all of Paynter’s students were asked to propose designs, then the class voted on the top designs for murals in the gym. These designs then were reviewed by UK's Art in Public Places committee. In addition, there was feedback requested from students who work in the gym and student users of the gym, and in the end a retro Wildcat design was chosen as the favorite.

Graduating digital media design senior Selma Odobasic’s mural was created with the specific Alumni Gym wall in mind as it allowed for a TV to be located in the mouth of the Wildcat.

“From the beginning, I could picture people like posing beside it and flexing, or something like that,” Odobasic said. “So that’s the hope, that they would do that, post it, like it, pose by it. But mostly, I wanted to create an art piece that was showcasing strength and art being strength.”

Funded by Office for Student Success, Odobasic worked with classmates Peter Dunaway and Jesse Miller, digital media design students, to execute her proposed mural over the span of three weeks.

“They did an amazing job taking a digital design and transferring that design to a mural painting onto the wall,” Paynter said. “They were creative, conscientious and professional, and they worked well as a team. Really outstanding!”

The Office for Student Success agrees and sees more student-designed art filling campus in the future.

“We are student-focused at our core and we want to promote that student experience and student work, so I see us continuing this with many different classes in the College of Fine Arts that produce different sorts of art on a regular basis and promote and present that in our Student Success spaces,” Lance Poston, assistant vice president for external relations and operations. “But really this has been the start of a process we want to replicate. We are happy to be a part of that and really thankful that they agreed to share their art.”

In the end, Odobasic couldn’t be happier with the outcome. “I think students, more than anyone, know what the campus needs and what we need a voice about and what the community needs — so, I’d love to see more of it.”

The Guerrilla Art, Interventions and Social Practice class would like to thank Lance Poston, Ron Lee and Steve Stauffer, Perspectives Paint & Design, and everyone else involved in the mural, especially Facilities Management's support.