At the conclusion of the traveling exhibition, UK Art Museum will receive the painting “Shore Hole (Urban Bourbon)” in honor of Jeffries. 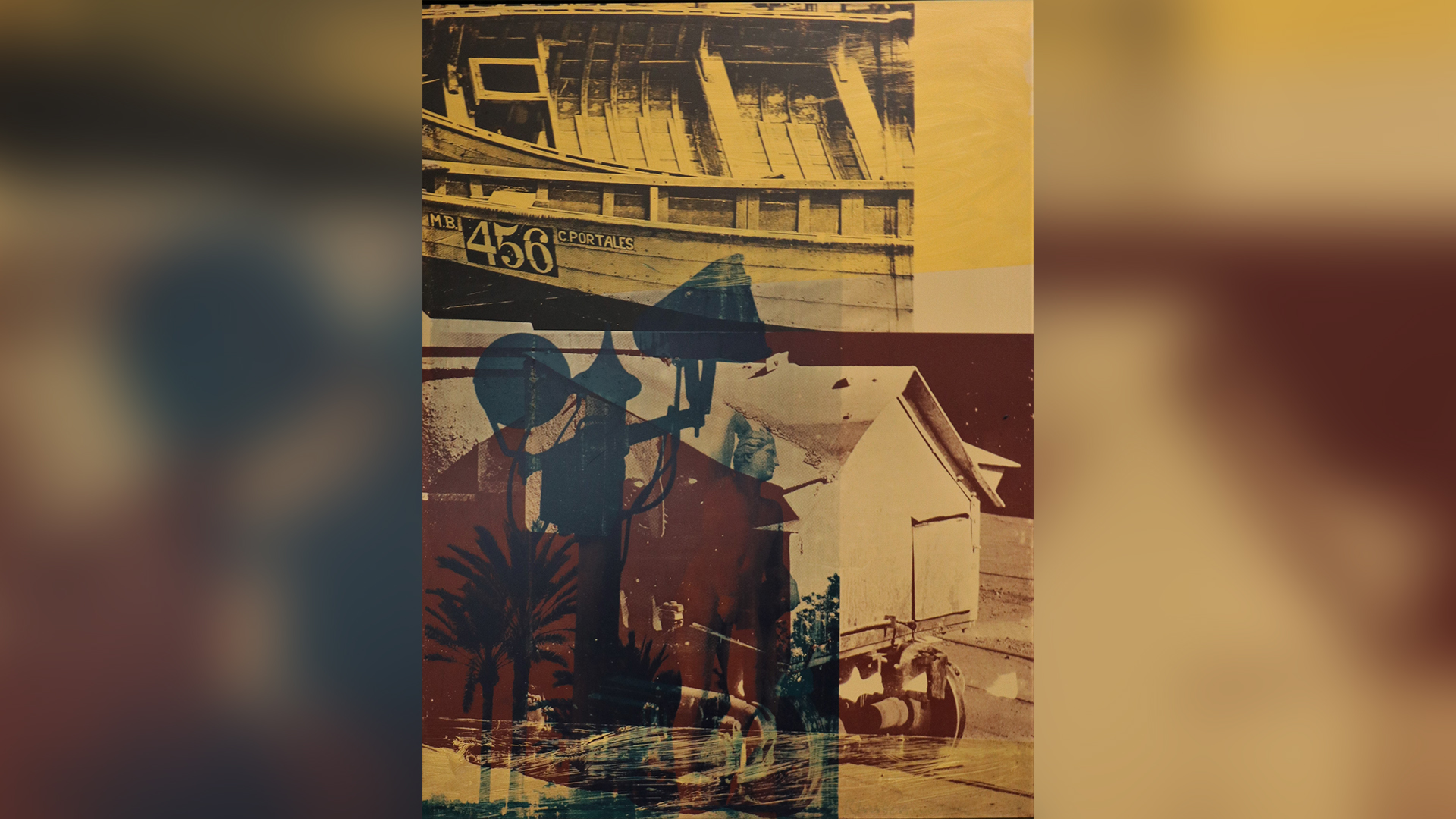 On Friday, Sept. 23, 2022, the University of Kentucky Art Museum hosted patrons from across the country for a special exhibit — “RAUSCHENBERG: A Gift in Your Pocket from the Collections of Friends in Honor of Bradley Jeffries.”

Robert Rauschenberg was one of the 20th century’s most significant artists, working in media that included painting, sculpture, printmaking, photography and performance. His inclusive practice spanned six decades, during which he combined traditional art materials with ordinary objects from the urban and beachfront environments in which he lived.

Bradley Jeffries was born in Columbia, Kentucky, and graduated from UK in 1971 with a degree in journalism. After graduation, she settled in Sanibel, Florida, where she had a regular newspaper column and weekly spot on television news before becoming Rauschenberg’s studio manager in 1978.

“RAUSCHENBERG: A Gift in Your Pocket from the Collections of Friends in Honor of Bradley Jeffries” brings together rare and unseen paintings, drawings and photographs that were gifted to Jeffries by the artist, as well as personal objects and ephemera that honor their friendship. The exhibit is free and open to the public through Jan. 7, 2023.

The exhibition is curated by Jade Dellinger, director of the Bob Rauschenberg Gallery at Florida Southwestern State College. It showcases Jeffries’ life and career and demonstrates the marriage of fine art and communications disciplines. Stuart Horodner, director of the UK Art Museum, believes the education that Jeffries received as a journalism student at UK prepared her for a life in the art world, even if she never planned to work in the field.

“The university expands your interests by sheer exposure to other subjects,” says Horodner. “All the things you learn at a place like UK becomes your ammunition when you go out into the world.”

“The story behind how the exhibition came to be at the UK Art Museum and the connection with UK alumna, Bradley Jeffries, reinforces that all UK grads are prepared for whatever wildly possible opportunity that might be presented to them over their lifetimes,” says Mark Shanda, dean of the UK College of Fine Arts. “We celebrate the generosity of the Bradley Jeffries family in making possible this remarkable opportunity for all of campus and the Lexington community to enjoy.”

Special thanks to the UK College of Communication and Information for partnering on this gift to the museum's permanent collection.

“We are thrilled that this gift of art to the university allows us to honor the legacy of Bradley Jeffries, a UK journalism alumna who played such an important part in Rauschenberg’s career,” said Jennifer Greer, dean of the College of Communication and Information. “Bradley used her journalism training to organize information, communicate with Rauschenberg’s many publics and tell the story of his process and practice. Without Bradley’s central position in his world, we would have less insight into his work, and we possibly would have fewer works to enjoy. Her protection of his time allowed him to concentrate on creating the beautiful pieces you see in this exhibit — and hundreds beyond that. It was a true partnership, and I love that that partnership has brought this amazing work of art to UK through the gift from Bradley’s family.”

Jeffries and Rauschenberg met for the first time on a beach in Captiva Island, Florida, and became fast friends. Shortly after their initial encounter, Jeffries began working for Rauschenberg as a studio assistant. Over time, she became his lead studio manager. Jeffries organized employees and access to Rauschenberg himself, who had 30 years of notoriety behind him and was in high demand in the art world, political sphere and celebrity circles that included names like Sharon Stone and Meryl Streep.

“If you wanted to visit with Rauschenberg, you had to get through Bradley,” says Horodner.

Though Horodner only learned about Jeffries after her death in 2021, he is sure that she was personable, intelligent and organized.

“You don’t work for someone like Rauschenberg for 30 years without them trusting you, liking you and feeling like they understand you.”

Jeffries’ cousin, Mary Lynn Houlihan, a two-time graduate of the College of Social Work, took great honor in learning the details of her cousin’s life through Jeffries’ writings and stories Jeffries’ friends shared. She took great pride in knowing Jeffries was a formidable woman.

“At some points, not even American presidents could get past her,” says Houlihan. “I loved learning that about her.”

Though Jeffries left no instructions on what to do with the works that Rauschenberg gifted her during her life, Houlihan and her mother, Ann Dupree, have tried to follow Jeffries’ wishes as closely as possibly by reading old letters and speaking with her friends. Dupree graduated from the College of Communication and Information with a degree in journalism in 1963, eight years before Jeffries. The two women had been raised like sisters in Columbia, Kentucky, and remained lifelong Wildcats.

Houlihan believes Jeffries would be thrilled to be memorialized at UK and have Rauschenberg’s work featured in a collection where he was not fully represented.

“Bradley would have made sure the art went into the hands of people who would love it or who knew and loved her,” says Houlihan. “I feel very privileged to have had the chance to participate in all of this.”

While much of Jeffries life and career was devoted to maintaining Rauschenberg’s name and legacy, “RAUSCHENBERG: A Gift in Your Pocket” reflects more than just Rauschenberg rarities.

“The show represents a time and place for Bradley and Rauschenberg,” says Houlihan. “So many of the pieces he gave to her honored parts of her. This art is so different for him and for Bradley.”

As part of the exhibition, which will travel to Black Mountain College in North Carolina — Rauschenberg’s alma mater — Jeffries’ family is also gifting one piece to each of the venues. At the conclusion of the traveling exhibit, UK Art Museum will receive a painting titled “Shore Hole (Urban Bourbon)” in honor of Jeffries.

Horodner believes the opportunity to acquire a Rauschenberg painting is a once-in-a-lifetime opportunity for the university.

“This is a very significant donation from Bradley’s family to our holdings. We are extremely grateful,” says Horodner. “We get offered a lot of things. We only say yes strategically, considering representation, diversity, excellence and significance.”

If Horodner had had his pick, he would have chosen the “Urban Bourbon” piece. For Houlihan, the sense of Kentucky is rooted in the piece.

“When I looked at the ‘Urban Bourbon’ piece the first time, it reminded me of Churchill Downs,” says Houlihan, “the way people take photos from the side when the horses are running down the track.”

In reading Bradley’s correspondences and notes, Houlihan learned that her cousin remained a Wildcat fan her whole life, keeping up with UK men’s basketball results, tracking scores and documenting her thoughts on games.

Jeffries had written expressly that upon her death, she didn’t want a service. Just a beach bon voyage on Captiva Island and a champagne toast. With the help of Jeffries’ friends, Houlihan orchestrated a celebration of her cousin’s life. Jeffries’ best friend and Rauschenberg’s fabricator, Lawrence Voytek, manufactured three rockets containing Jeffries’ ashes.

“It was so incredible and terrifying,” says Houlihan. The explosions were artful, illuminating the sky above the golden beachfront, so full of color and energy like many of Rauschenberg’s works throughout his life.

“Bradley’s whole life had revolved around Rauschenberg,” says Houlihan. “It was remarkable.”