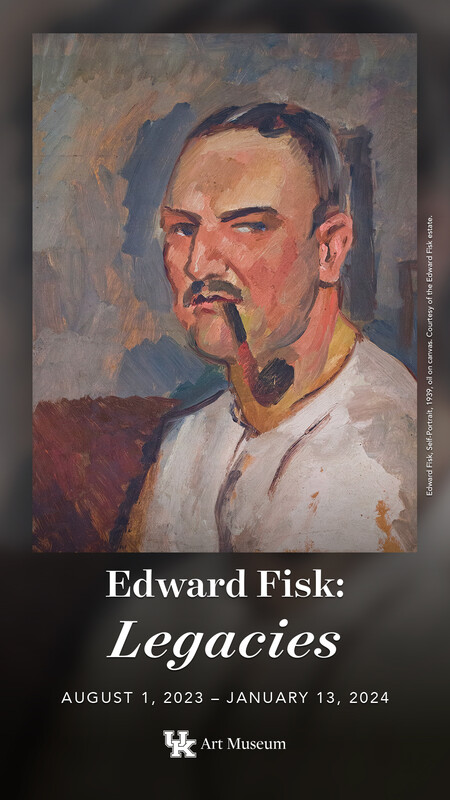 In September 1926, American modernist Edward Fisk left New York City to join the art department at the University of Kentucky. He had been embedded in avant-garde art circles in the city, where he exhibited in the company of friends like Stuart Davis, Charles Demuth, and Marsden Hartley. He was also close to Eugene O’Neill; the artist and his friends traveled to Provincetown over several summers to visit the playwright and his literary cadre. Fisk came to Lexington following the breakup of a first marriage; the move gave him the peace, time, and space to make his art and find love again. In 1930, he married Lucy Young and they settled into an apartment in Hampton Court.

In 1998, Fisk’s oeuvre was documented in a major retrospective at the Museum organized by former curator Rachael Sadinsky. At the time, the artist’s children Allie Hendricks and Milton Fisk gifted fifteen pieces of art to the Museum. This includes one of the most-beloved paintings in the collection, a portrait of Mary Daniel, who worked as a housekeeper, served as a reluctant model, and projects the cool self-possession of a queen. This exhibition, Edward Fisk: Legacies, celebrates these works together with the family’s 2022 donation of twenty paintings, watercolors, and drawings. The resulting collection of thirty-five works will create a representative archive of the artist’s work that can form a basis for future scholarship.

Fisk was a gifted painter, draftsman, and printmaker who had studied abroad, and he explored a variety of European and American modernist approaches that seem chosen according to his subject matter. His portraits often feature expressive brushstrokes and closely cropped compositions. On a trip to Italy in 1925, he made exquisite landscape sketches that show an influence of both Cezanne’s compositions and Cubism. By contrast, the landscapes he made on sabbatical in Cornwall, England, in 1933-34, feel far more in line with the organic nature of American modernism, with an emphasis on curvilinear lines and form.

Our sincere thanks go to the entire Fisk family, in particular Allie Hendricks and the late Milton Fisk, along with their children Teresa Hendricks and Melany Fisk.